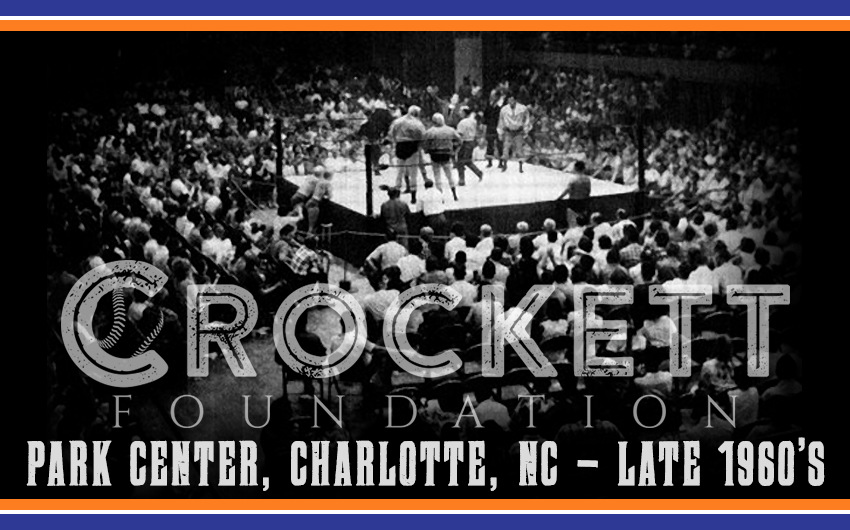 It is the late 1960’s-1970’s and a blonde hair, blue eyed, tanned little girl is perched on the back of an old wooden folding seat, the kind that were the seat of choice for that time, while her younger sister sits in the seat itself. The seat is located on the highest row in Charlotte’s Park Center and is wedged against a cement support beam. The building gets louder and louder as the it fills with wrestling fans there to see their favorite baby face or heel. These two girls assume this position every Monday night during Mid-Atlantic Wrestling matches.

These two quickly become the darlings of this Park Center section. Wrestling fans spoiled them with gifts. New underwear from the lovely lady that worked at the local Hanes Factory and homemade baked goods from someone else. Another fan would make a concession stand run and always bring something back for the 2 hard working girls. The fans knew what it was like to work for meager wages so they did all they could to make these little blondes one of their own. The girls enjoyed every minute and adored these people.

That’s correct. The girls are there to work. The little girl perched on the back of this seat in the last row of Park Center had the most important job in the building each Monday night. She was in charge of the microphone that came down to the center of the ring. The microphone was on a cable that tied off on the cement pillar next to the girls seat. Once untied, the cable raised and lowered the microphone that the announcers and wrestlers used. The microphone that the announcers used to start and end the matches . The microphone that wrestlers used to call each other out or yell at the crowd. Yep..if it wasn’t for this little girl no one would hear Ole Anderson, with his brother Gene by his side, go on one of his infamous tirades. If it wasn’t for this little girl, no one would hear Blonde Bomber, Rip Hawk respond to a fan in the crowd that is threatening to shoot him and along with his tag team partner, Swede Hansen.

Mid-Atlantic Wrestling at the Park Center in Charlotte, NC

Even in this electric environment, a job can become just that, a job, and sometimes you have to do things to make it more interesting so the blonde, blue eyed, tanned little girl soon realized how powerful her position was. If announcer George Harbin, has been particularly crotchety that day, a quick jerk on the cable would make the microphone swing just out his reach. If Ole Anderson had unmercifully picked at her that day, the microphone could simply hang there just above his finger tips. But there was risk to this kind of horseplay, that risk was her grandfather, father and uncles. Do this while they were to close and she would be busted. Do it while they were on the other side of the building and the family would have to assess whether it was worth running up 2 flights of stairs to put an end to the power play. Three words describe this little girl with the round cheeks during these moments and those three words are Drunk with Power.

These behind the scenes antics continued until the last Mid-Atlantic Wrestling match was held at Park Center. Most of the victims of her antics are no longer with us but the little blonde hair girl, all grown up now, still chuckles to herself when she remembers the wonderful time she had irritating some of wrestling biggest stars. That little girl grew up to become the President of the Crockett Foundation, Debbie Ringley Mrozinski.