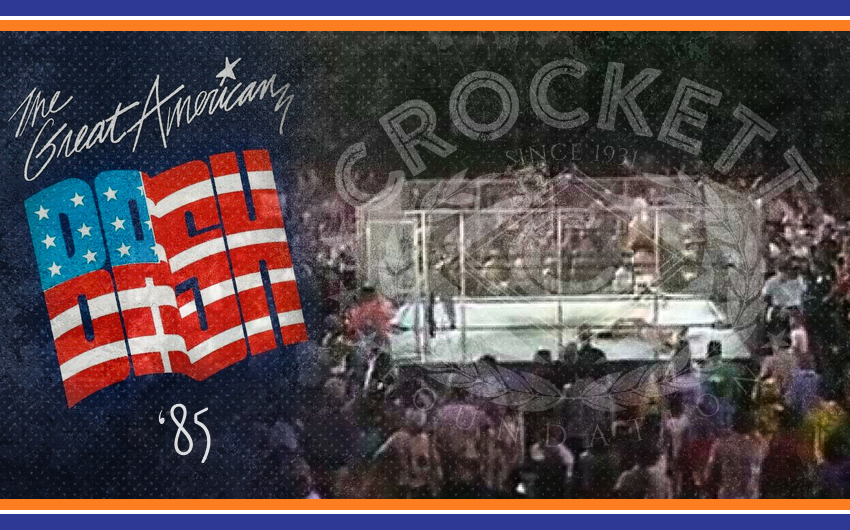 Jim Crockett Promotions had put together a great card for this event. Jimmy Valiant vs Paul Jones in a Dog Collar match. Ole and Arn Anderson vs Buzz Sawyer and Dick Slater in a NWA Tag Team Championship Match. The match between Ric Flair and Nikita Koloff which had David Crockett as a special referee was even interrupted when a fan jumped into the ring and grabbed Nikita Koloff from behind. Which, I think everyone would agree, is dangerous under the best of circumstances. The night even included a concert by country singer, David Alan Coe.

American Legion Memorial Stadium in Charlotte, NC was a football stadium that opened September 1, 1936. It has a seating capacity of 21,000. It was flanked in the rear by Park Center. Park Center was a main stay in Jim Crockett Promotions weekly wrestling matches. There was a driveway that went downhill into a parking lot that divided the 2 buildings. The top of that driveway had a chain link gate and a 20 something blonde with a table, chair, walkie talkie and a clip board. By then end of the evening, that clip board and the pass list it held would become infamous to those that were lucky enough to be part of this massive event and allowed access to that parking lot.

Yes…allowed. As most of you know, you don’t get backstage at any event without being on some type of list. The night of the Great American Bash that list was in the capable hands of our president, Debbie Ringley Mrozinski’s. Debbie was a veteran when it came to being in control of the pass list. Her grandfather, Jim Crockett, had instilled in her long before this night that as much as he loved his fans, that tickets to his events should not be just given away. After all, Big Jim was a business man through and through.

The night of the Great American Bash was different though. Debbie was used to women walking up because a particular wrestler was supposed to leave their name on the list. Some wrestlers were bigger offenders than others in this situation. More times than not the woman’s name was not on the list and crying soon followed. This night it was a motorcycle gang that was not on the list.

As was mentioned, country singer David Alan Coe was also performing that night. David chose to use motorcycle gangs as security on his tours. Things were going along as usual until 4 Harley Davidson motorcycles came roaring up to the gate followed by several cars and a couple of busses and then more motorcycles. Debbie opened the gate and asked for the riders names. After looking at each other with a confused look, their only answer was that they were with David Alan Coe. Simply put, that wasn’t good enough. You see this is a list of specific names and unless these guys, who all looked like the stereotypical Harley Davidson riders, could find their name on this list they weren’t getting in unless they bought a ticket. The bikers started to become quite annoyed with this situation pretty quickly apparently these guys were not used to being told no. The standoff continued to escalate for about 20 minutes until the head of security for Jim Crockett Promotions, Doug Dellinger, brought it to a close by writing each of the names on the list so that they could be checked off one by one.

The caravan finally made it’s way through the gate and down the drive to the parking lot. After parking their motorcycles, several of the riders started making their way up the hill back towards Debbie and the gate. Several of her friends who had gathered, started to mumble under their breath about the possible outcome of the slow heads down uphill walk that David Alan Coe’s security team was now making. Having finally made the trek back to Debbie, the bikers raised their heads, gave her a big smile and high fives. They quickly made her an honorary member for the night and spent the rest of the evening being the exclamation point as she told folks they weren’t on the list. So yes, Jimmy Valiant defeated Paul Jones, the Andersons defeated Sawyer/Slater and Ric Flair defeated Nikita Koloff but our own foundation president brought down a motorcycle gang.

To help a Veteran in need, follow the link below to donate. Every donation during the month of September gets our commemorative “When Wrestling was Wrestling” t-shirt.