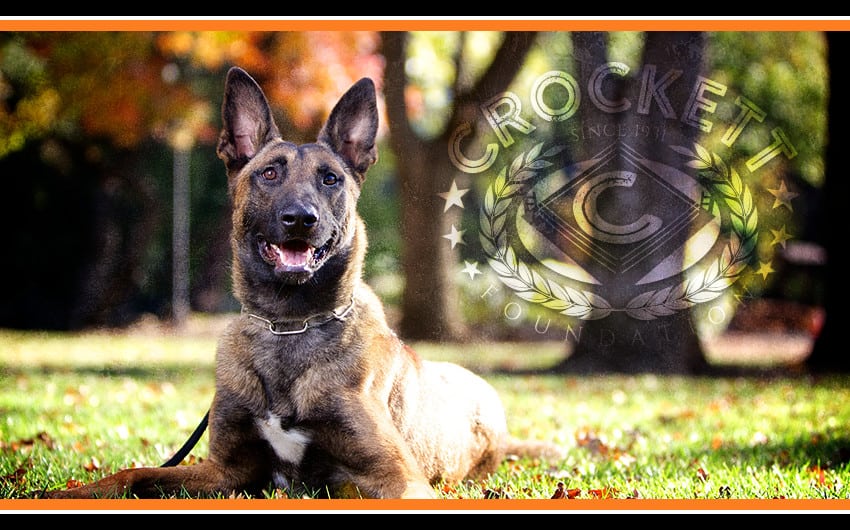 Written for the Crockett Foundation by Diane Baren, October 2016

Recently I had a meeting with an art instructor who lives with Post Traumatic Stress Disorder (PTSD) herself and has a certified Service Dog. Wilson, the dog, is trained to park himself on a purple yoga mat beside Margaret when he’s on duty.

Margaret’s able to carry on a conversation, teach classes, and go shopping with Wilson on duty. We were planning an expressive arts workshop catering to Veterans with mental health concerns and PTSD struggles.

Someone’s pet was off-leash inside the dog-friendly building where we were meeting – and wasn’t wearing a collar.

It hit the fan, people! No fight. Just a happy dog jumping all over Wilson like somebody busting into your place of business and hanging out in your office talking about a bunch of personal stuff in the middle of your work day – uninvited. Like you’re not actually sitting there working and doing your job! Can you imagine?

Because the friendly off-leash dog jumped all over him, Wilson the Service Dog came unglued and went off-duty to play.

Not okay for an on-duty Service Dog. And, guess how the adorable / awful playtime ended. Nobody could grab the playful dog because he wasn’t wearing a collar. The owner had to pick up his 60 pound dog and carry it away from us.
Wilson wears an official Certified Service Dog vest when he’s out and about with Margaret. Currently there’s hot stuff in the media about people pretending their dogs are Certified Service Dogs so their dogs can come with them all over the place. It’s a problem. Because, guess what: the fake service dog can go into its instinctual protective mode when a new person approaches their human.
We look at the (fake) service dog like it’s an elite super-being, trained in ways of tranquility with supreme knowledge of interspecies relationships. The fake service dog looks safe: but its owner has only dressed it up in a costume, hoping the dog will remain calm no matter what.
Some of us dog lovers are not afraid to approach a dog we’ve never met before and plan to instantly bond with the canine. I do it with dogs that aren’t wearing Service Dog vests (and I recognize that I probably shouldn’t do that – some of the time).

It’s like for the first 15 seconds when I’m meeting a dog my secret goal is to make that dog love me. That’s instantaneous, really. To me, truthfully, it’s like a badge of honor or something: I boost up my own self esteem privately inside if a dog loves me instantly. Anyhow, I digress.

Service dog etiquette tells us that we should absolutely not touch that dog while in that vest.

They are working. They’ve taken a command from their handler and are executing it in front of your eyes whether you see it or not. They are doing what they’ve been told to do, which might be:
• Standing in front of their human to create a certain amount of distance between you and them.
• Standing behind their human in the “I’ve got your six” position of buddy protection.
• Leaning on their human to keep their human in the present tense – not amidst a PTSD flashback, but right there with their dog buddy and what’s going on around them there.
• Standing close enough to their human – and paying close enough attention – that if they sense a seizure coming on there’s very little distance to cross to get up on their human and alert them. They need to have no distractions by humans petting them, and no people standing between them and their human so ultimately their human can protect themselves from the problematic seizure that’s about to occur.
• Listening attentively to be the ears of their deaf human. (Sometimes it’s the littlest guys who are trained to be hearing dogs and they appear to simply be lapdogs. For example, the Chihuahua you see with a Certified Service Dog vest on, sitting on its momma’s lap at a doctor’s office.)

So, it’s best to just ask the human if their Service Dog is currently on duty before approaching the dog as if it’s just normal pet stuff.

It’s life or death to the human. The difference between having a buddy on duty to help prevent a PTSD flashback, and spending the afternoon in personal horror and torment. It’s the difference between going to a safe place to sit down prior to a seizure consuming our body, and hitting your head on the table on the way down to the floor when the seizure hits because your on-duty Service Dog was hijacked by playtime.
You may donate to the Crockett Foundation Veterans charity and help cover the costs to train Certified Service Dogs for Veterans in need.