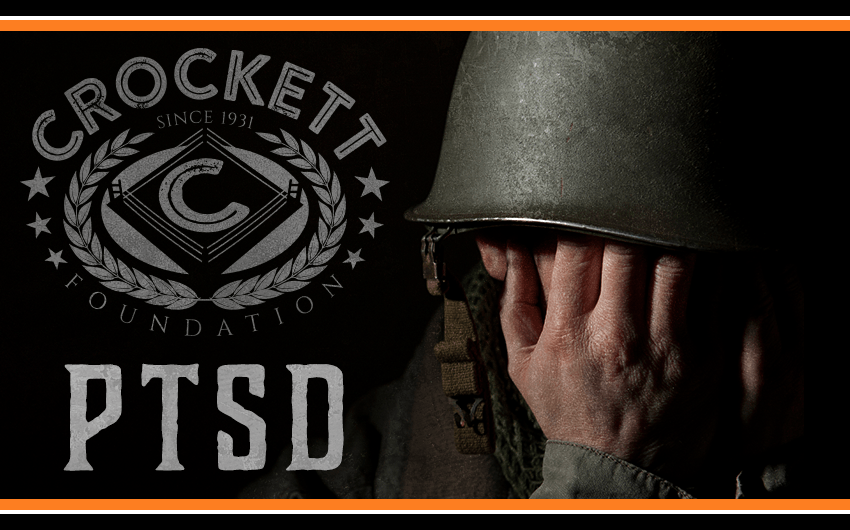 Written for the Crockett Foundation by Diane Baren, October 2016

Sometimes people yearn to talk about what’s going on inside themselves – with someone who will understand. Listening, very well, helps build rapport between people.

The Veteran and I understood one another, in part, because we’ve both suffered from PTSD. We listened to one another because we are caring individuals.

I’m a civilian. My PTSD was in childhood.

How is it possible for someone who’s not a Veteran to have PTSD?

In everyday language the following explains it very well, from Brainlinemilitary.

“PTS is a common, normal, and often adaptive response to experiencing a traumatic or stressful event. Common occurrences, like car accidents, can trigger PTS as well as more unusual events like military combat or kidnapping. Almost everyone who experiences a scary situation will show at least a few signs of post-traumatic stress. That’s because our brains are hard-wired to tell our bodies to tense our muscles, breathe faster, and pump more blood when we’re under intense stress. This is the “fight-or-flight” response that prepares your body to deal with a threat or challenge in the environment by pumping more blood and oxygen to your muscles, and it shuts down non-critical functions like digestion. This fight-or-flight response is a normal reflex during and sometimes even after a traumatic event, which is why PTS is considered a normal reaction and not a mental illness.”

“Common symptoms of post-traumatic stress disorder include reliving a traumatic event through nightmares, flashbacks, or constantly thinking about it. You might avoid situations or people that remind you of the event, have only negative thoughts or emotions, and constantly feel jittery, nervous, or “on edge.” Although some of these symptoms sound similar to PTS, the difference is the duration and intensity. Symptoms that continue for more than one month, are severe, and interfere with your daily functioning are characteristic of PTSD.

Behaviors that indicate professional intervention is needed may include drinking or smoking more than usual as attempts to reduce anxiety or anger, and aggressive driving. Service members who have experienced combat can be especially nervous driving under overpasses and past litter on the roadside —behavior learned in Iraq and Afghanistan where insurgents hide improvised explosive devices in garbage and use overpasses to shoot at vehicles. Other behaviors that indicate that help may be needed can include being wary of crowds, showing reluctance to go to movie theaters, crowded stores, or nightclubs, and avoiding news that addresses overseas combat or getting angry at the reports.”

PTS (without the “D”) is a normal occurrence for human beings as a species. It relates to the fight-or-flight response animals function with all day long.

Whether you’re a Veteran or a civilian, it’s courageous to talk about your own PTSD experiences. People might become afraid, or make fun of us.

As an entrepreneur who’s developing a Veterans charity in the arts, I’ve been building relationships with like-minded Veterans across the country. I’ve built trust by being authentic: the risk I take in talking about my PTSD is calculated and worthwhile to me.

Once, when talking with a civilian businessman regarding my Veterans business venture, I shared that as a child I suffered from PTSD.

He chuckled “Oh, was that self-diagnosed?”

Then I almost punched him really hard in the face! I didn’t punch him – but I do wonder if being punched by a woman would have caused him Post Traumatic Stress (kidding).

He wasn’t recognizing that civilians can have PTSD too. I was dealing with someone who chose to be disrespectful of me rather than inquisitive.

Getting help for my PTSD from medical professionals and counselors at a young age and also in adulthood after the “D” of “Disorder” fell away helped me a great deal.

I’ve learned a lot about human beings. It’s allowed me to position myself beside Veterans – as a civilian – and have common ground.

You can donate to the Crockett Foundation and help Veterans living with PTSD.