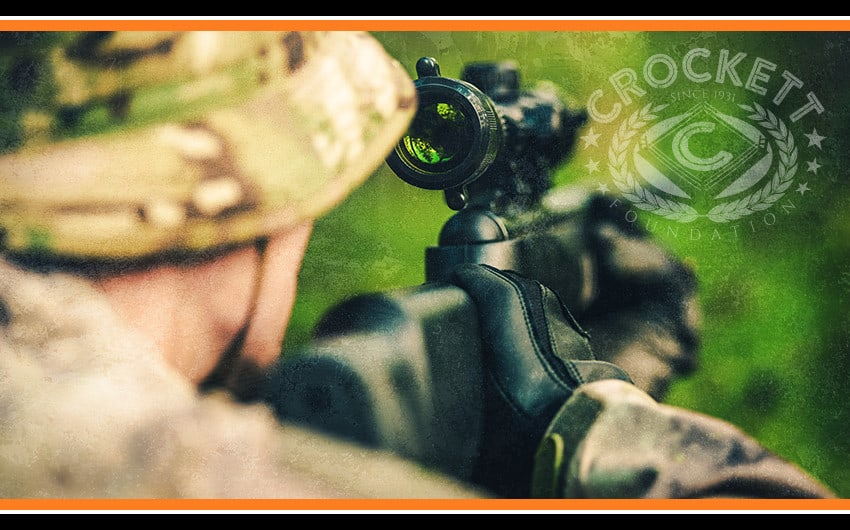 Written for the Crockett Foundation by Diane Baren – May 2017

The first couple of times I spoke with a combat Veteran about a “good kill” they called me onto the table about the compassion they were seeing in my face as a reaction to the story. My face showed compassion as my mouth contorted in a bit of sadness. We talked about that look on my face and I’m glad we did.

My friend said to me in exasperation, “You care about that f—-r?” He was a blanking blah-blah-blah piece of blah-blah who killed 20 blah-blahs and blahbadee blah-blah! Look at your face: you still care about him after I just told you what he did!”

My response was to listen to him—letting him finish as least without interrupting, and then setting him straight about this look of compassion on my face. I was in the moment, so honored that he was pushing back and also listening to my answer.

I explained that this look of compassion on my face is not a judgement from me about this bad guy being killed or otherwise getting what he deserved. It’s a physical reaction because I can discern from the story what the bad guy must have felt himself—as a mammal, a human like me–in those moments of capture. It is rare that I’m fortunate enough to be told one of these combat stories: I’m really listening and having empathy for the people involved.

My friend the Vet was objecting to a look of compassion that comes over my face when I listen to people talk, sometimes. Isn’t there something in each of us that stops us in the middle of our day, for just a minute, while we put ourselves in someone else’s shoes and feel it? Doesn’t your face contort a little or even a lot when you’re imagining something in detail?

As an analogy, you can imagine some average Joe with too many kids and jobs, and you put yourself in his shoes as a Dad and you can imagine what it must feel like to be him. When I feel what I imagine he feels it is not synonymous with wanting to give him a break: feeling like him and caring about him are two separate things. Likewise, imagining feeling like a captured troop and caring about him are different things as well.

I have a visceral reaction to hearing about a bad guy being captured by the US military: I feel the fear of the captured one. The look on my face is not an intellectual judgement of the punishment he’s getting.

Not for long, but part of hearing a Veteran’s story of making a capture or a kill is trying to put myself there and it is pretty darn scary to feel caught by angry, punishing soldiers and Marines.

It’s a very special place to be in when a Veteran opens up and talks about the work with the weapons and the enemy. I’m honored to be trusted to hear a story now and then. As a civilian it takes courage to be clear and explain to the Vet that the compassion on my face is not judgement of his actions but rather it’s the physical manifestation of me really listening to what he’s saying about the good kill.

By being courageous as a civilian and continuing to talk with the Vet he winds up having less negative fantasies about being judged by the American public.

He gains a more realistic understanding of how this civilian (and some others) react to what we hear about war. I learn more about what it’s like for a Vet to be trusting of me as a civilian when they want to talk about their combat experience.

The military is taking on writing and other forms of creative expression and art – like sculpture, music, and painting – to help rewire the tender brains of Veterans who are living with Traumatic Brain Injury (TBI) and PTSD.

At the Crockett Foundation we’re working to identify the best Veterans charities so your donation with us goes to support their noble missions.

With our international audience we’re in a wonderful position to support some of the best Veterans charities who just might need a boost of funding here and there. We’d love for you to be a part of our team. To help Veterans living with PTSD and TBI to have greater joy in their lives you may donate to the Crockett Foundation here.