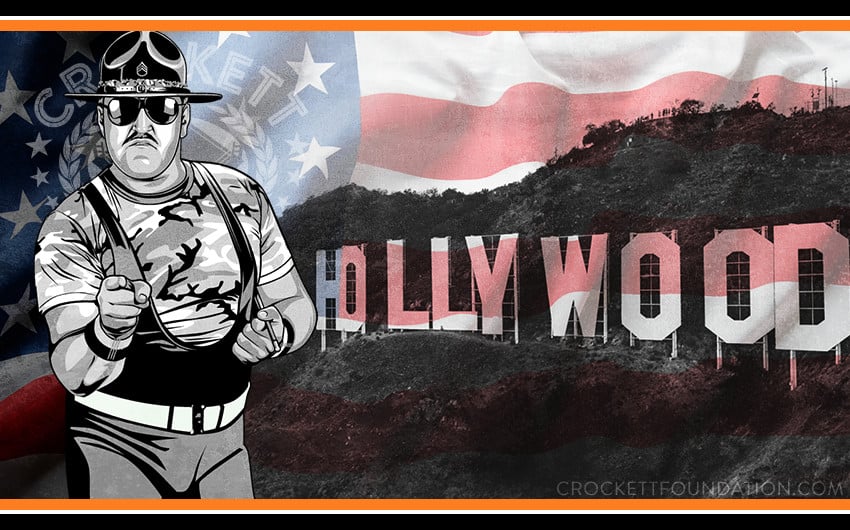 Written for the Crockett Foundation by Diane Baren – May 2017

Successful celebrity-related Veterans’ charities might lead us to think that someone such as Gary Sinise—of the Lt. Dan Band charitable organization–served in the military. Did he serve? Nope. With great respect and with gratitude for his work supporting Veterans in several ways, in August 2012 Sinise was made an honorary U.S. Navy Chief Petty Officer and one year later in August 2013 Sinise was named an honorary Marine.

Thinking of our US military currently serving this Memorial Day weekend 2017, and those we have lost in service over the years, here’s a list of interesting notes about celebrities who have served their country.

Drew Carey, of The Price is Right television fame, served in the Marine Corps Reserves. This came about as Carey believed he needed the structure and discipline of the military in order gain direction and then achieve goals in life. So, while a student at Kent State University in Ohio, in 1980 while visiting his brother in California, Carey enlisted. His six years as a Marine Reservists toughened and refined Carey physically and mentally; he gained self-confidence and direction, and paid his way through college working as a waiter and taking odd jobs. This is also where he established his signature look—a military buzz cut with thick black standard-issue eye glasses.

The “Expendables” actor moved through the enlisted ranks to become Sergeant in the 101st Airborne. He was a collegiate wrestler and fighter, he served as a four time US Olympic wrestling team alternate while in the Army, and he is a six time world heavyweight and light heavyweight Ultimate Fighting Championship champ and Hall of Famer.

Actor Adam Driver has been quoted as crediting his time serving in the Marine Corps as giving him the strength to reaudition at the prestigious Julliard School for performing arts. Often as a Marine you gain skill and experience that lead one to feel like they can do anything: Driver’s experience in the Corps showed him how and where to focus drive to achieve goals when he got out.

A 1995 recipient of the Kennedy Center Honor for outstanding contributions to American culture through the performing arts, Sidney Poitier enlisted in the Army at the age of 16 in 1943. Poitier was homeless and cold, so he lied about his age in order to be accepted into the military. He served as a medical attendant at a mental hospital in New York, where things seem to have gone awry: after weeks of Army-mandated therapy sessions Poitier admitted to lying about his age and was discharged from military service.

Robert Remus was a Marine drill sergeant on Parris Island before becoming Sgt. Slaughter of wrestling fame. Remus is an NWA United States Champion, as well as NWA World Tag Team Champion with Don Kernodle. Among other accolades, in 2004 he was inducted into the WWE Hall of Fame and Remus is the first real-life person to be immortalized as a G.I. Joe action figure. Sarge is the inspiration for the Sgt. Slaughter character in merchandising products as well as the cartoon G.I. Joe: A Real American Hero, and he appeared in G.I. Joe: The Movie.

JD Salinger is, in-part, famed for writing the widely praised classic with a profound fan-base The Catcher in the Rye during his active duty service in battle. On D-Day he and other men stormed the beaches of Normandy, landing on Utah Beach and later fought in the Battle of the Bulge. They liberated the Dachau Nazi death camps.

JD Salinger is the only celebrity Veteran in this post article who was drafted, rather than enlisting for service of his own accord.

The famed author of Slaughterhouse-Five, Kurt Vonnegut was captured during the Battle of the Bulge in winter of 1944 and then confined in a German prisoner of war camp near Dresden. Vonnegut received a Purple Heart for his service and three bronze stars.

Criteria for receiving a bronze star: “Any person whom while serving in any way in or with the United States military after 6 December 1941, that distinguished himself or herself apart from his or her comrades by brave or praiseworthy achievement or service, that did not include participation in aerial flight. The act justifying award of the medal must be performed while fighting an enemy of the United States, or while involved in conflict with an opposing/foreign force. It can also be awarded for heroism while serving with friendly forces engaged in combat against an opposing military in which the United States is not a belligerent party.

Heroism carried out under acts as described, which are of a lesser degree than those awarded of the Silver Star, will justify the award of the Bronze Star Medal.”

Montel Williams completed a 20+ year career in service with the US Marines in 1996. During his career he earned numerous awards and commendations and rose to the rank of lieutenant. Williams was the first black enlisted Marine to graduate from both the Academy Prep School as well as the US Naval Academy in Annapolis, MD. In 1988 Williams began providing informal counseling for wives and families of the servicemen in his command. This lead to an invitation to speak to a group of children in Kansas City, Missouri, about the significance of leadership and how to overcome obstacles that might appear in front of them on the road to success. This was the start of his career in motivational speaking, which led to television’s The Montel Williams Show.

Donate to the Crockett Foundations here to help improve the lives of Veterans regaining joy in life while living with mental illness such as PTSD.