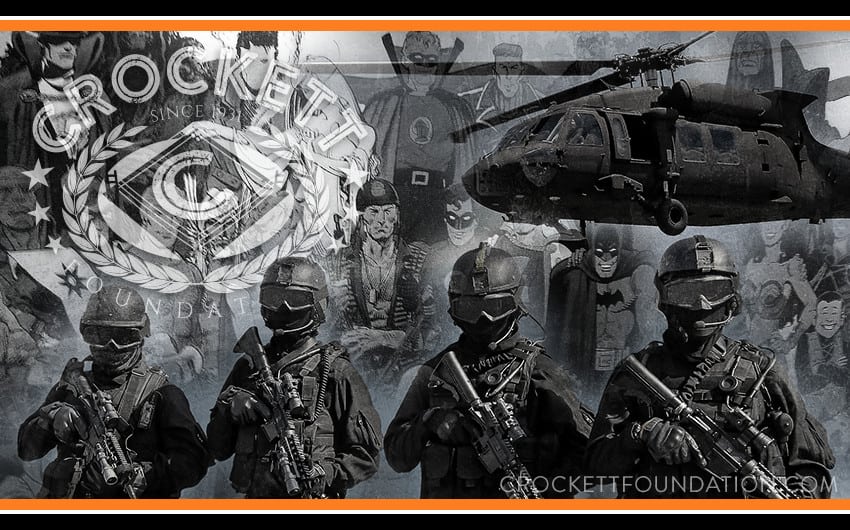 Written for the Crockett Foundation by Diane Baren – July 2017

The other day the kids and I had a (super) hero visit us at the house – or maybe he was a (cartoon) villain. It was a business acquaintance and friend of mine who’s a combat Veteran and he was dressed in his (scariest) biker clothing with his (monster-like) arm tattoos all exposed where the children could see them. His hair was overgrown and full. They are 3 and 6 years old.

This big and powerful man had arrived on his Harley Davidson before the kids got home from school — so they didn’t get to hear the motorcycle’s growl when it arrived and jack-hammered the air all around these suburban houses.

His identity only revealed itself to the children in the minute or so that passed while he left the house.

As the children got home my friend was just about to leave, so after introductions we headed for the front door. We were eager to see the motorcycle take off from our front yard. As the Veteran put on his leather jacket to leave I noticed wording across the back and so I naturally engaged the children to read the signage.

Illuminating the huge scull on the back of the jacket were words akin to “killing for my country”, and I had just introduced him to the children as my “friend”.

Then came the urgent feeling of needing to recover in the eyes of the children: The man I had introduced as my friend was promoting violence, and killing people. I had made the kids be respectful of him by telling them to read the words on his fabulously cool leather biker jacket.

In that unexpected awkward position – which I had just put myself into with this combat Veteran and the children — I was charged with kiddie negotiations and Veteran respectfulness in one fell swoop. Each statement that came out of my mouth next needed to be respectful and understandable to two very different groups – children and Veterans.

“Well, that’s not really a good thing to say” I sputtered out to the children. Little pizza covered mouths looked back at me in silence…back and forth between me and the biker in his killer’s jacket walking across their lawn to his motorcycle. My friend chuckled. He has little ones of his own.

This makes me wonder how a Veteran explains things to little itty-bitty kids, and what he or she chooses to explain verses choosing to avoid the subject instead.

And then came the “hero” talk. Since I introduced this scary-looking combat Veteran as my friend I felt the need to explain it to the children.

And there were emblems from his Iraq and Afghanistan combat service. I love seeing those patches on a leather jacket…and I can explain those words fairly easily to children.

In the kids’ world nobody else is being introduced as a hero.

Whatever a Veteran looks like on the outside in his tattoos and shaggy hair it truly is his character on the inside that matters to me. I figured if I just drilled into the kids’ heads that “this man is a hero” then he’ll stand out in their minds as a good guy.

We don’t live in a town where cartoon puppies run through the streets and solve mysteries, and even in 2017 there are no superheroes to fly down in costume and rescue us from crimes in progress. In 2017 we live with heroes all around us, dressed in everyday clothing and keeping quiet about their adventures.