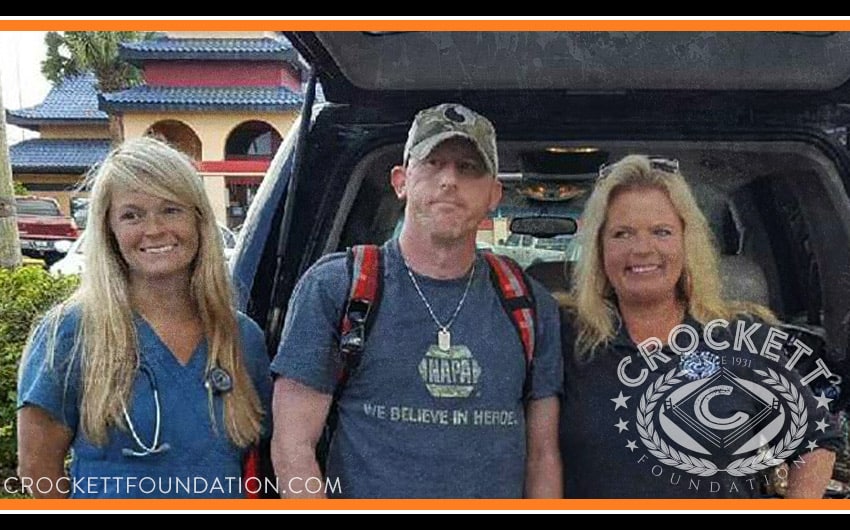 Sonny Brooks is a Veteran who recently traveled across the United States to see the country he served. He did this living in his truck with his Service Dog, Aquino. A while back Brooks was struggling to care for Aquino and The Crockett Foundation stepped in to help. It was a collaborative effort between Westlake Animal Hospital in Tarpon Springs, FL, The Veterans Alternative in Holiday, FL and The Crockett Foundation. We talked with Brooks while he was on the road and here’s that interview.

Answer: I was part of the signal section of the combat aviation brigade. I provided customer service for one of the many different officer attachments. Most were warrant officers and pilots of Chinooks and Black Hawks. I was part of the structure side, putting patches and software into laptops.

Answer: My former fiancé nominated me for a service dog. The first week I had Aquino I struggled with what he wanted from me. I was a soldier adjusting to having a new family with my fiancé and having a dog.

But when I first met Aquino, I’ve never had an instant connection like that in my life — with an animal or person. They let him off the leash and he came right over and put his chin on my knee. When the dog looked up at me I was crying immediately.

The way K9 Partners for Patriots works is that a volunteer fosters the dog in a home where there is already a service dog in the family. To see if temperament is there. Aquino’s brother did great, and Aquino was borderline: he wasn’t really confident in himself and he was pushy.

Aquino is on point now. He’s about 70 pounds and very energetic when he plays.

Answer: Aquino is basically aware, and compassionate about what I need. When I get mad or sad he puts himself on me or leans against me. When I have a problem falling asleep or staying asleep Aquino literally lays right next to me and presses up against me.

Also, in the morning I’m inclined to wake up and go, go, go – and having Aquino allows me to slow down and enjoy life.

Before I got Aquino I came out of my house maybe 5 or 8 hours per week. I was isolated. Aquino makes me go out. The best explanation I can give somebody is that the responsibility of having a dog “re-missions” you. It gave me something to look forward to on a daily basis.

And being part of K9 Partners for Patriots helped me because we both went through the program and we both graduated. It was an achievement for each of us and we went through it together.

Answer: Before, I was the first one to say a Service Dog was bullshit. What could a dog do for me? But since I’ve had Aquino, now I say a dog has helped me change my hopes into my dreams.

One of the most important things I’ve learned — for Veterans who have service dogs — is service dog awareness. I mean, understanding that for many Veterans there is no equipment they can find to overcome the emptiness of being a civilian. So having a trained Service Dog is having that piece of equipment.

It’s offensive when people get Service Dog vests online and put them on their pets just to gain access to places with them. Through the guidance of K9 Partners for Patriots I’ve become tolerant of people who don’t understand the meaning of the Service Dog patches the dogs wear.

Answer: When I came down into Florida I didn’t have identification, a car, or anything. In between orders I struggled mentally with things I grew up with, and with things that I experienced overseas. I was a shell of a man. I didn’t want to do anything. I covered that void with marijuana a lot. I would flake out and not go to work, lose sleep. We were struggling a lot. With bills and everything.

Answer: They bought a ton of food, and also paid for Aquino’s monthly meds. It was unbelievably generous. Aquino has a chronic itching problem, and that is why we went to the Vet – Westlake Animal Hospital, which is where the Crockett Foundation surprised us with these gifts.

{ To help Veterans living with PTSD to have greater joy in their lives you may donate to the Crockett Foundation here. }

Answer: Aquino and I have been traveling around — to see the country I served — for about 115 days now, and I wouldn’t be doing this if it wasn’t for him. People at Niagara Falls were so amazed at how well behaved Aquino was when I told him to stand there in front of the falls by himself that they began huddling around him and taking photos with him.

It is rewarding to see him behave and listen to commands. It happens all the time where our relationship is renewed, because different scenarios come up where Aquino can prove to me what he knows. Aquino is like my son.